It’s not very common to get denied the Russian visa, but what does happen sometimes is that some of the documentation provided is incorrect and you have to correct it. In this article, I will explain what are the most frequent errors that can cause your Russian visa application to be rejected or denied, and how to avoid or solve these errors. 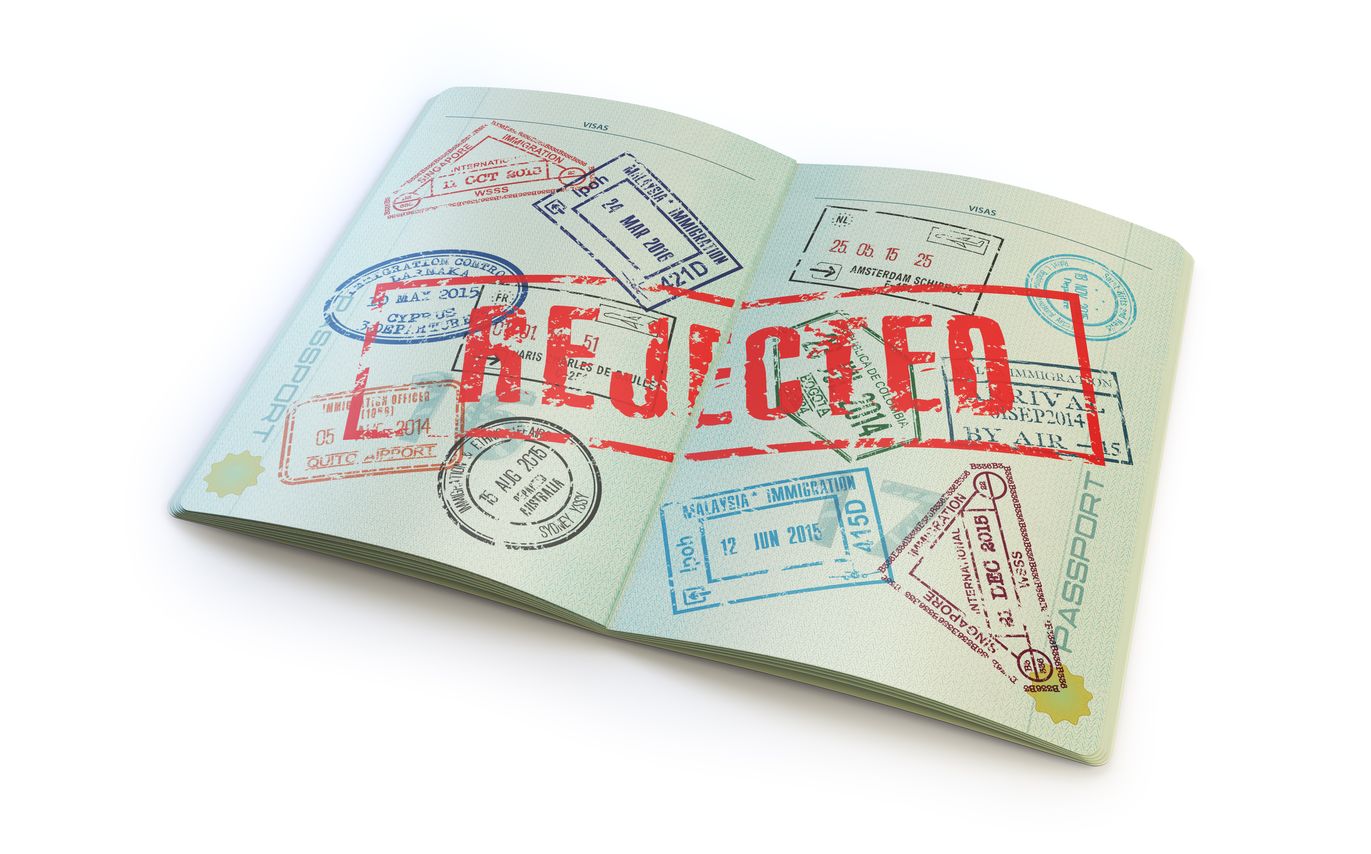 0. THE DENIAL OF THE RUSSIAN VISA IS RARE

Most people who apply for a Russian visa usually don’t have any problem when it comes to obtaining it. It is enough to follow the rules set by the consulates.

However, if these rules are not followed, it is likely that the visa application will be denied for reasons related to the documentation provided, due to the lack of any document or that any of the documents provided are incorrect or have an error.

In these cases, there is no need to feel alarmed since it can be solved easily, by simply providing the missing documentation or correcting the incorrect data. Therefore, it is important to begin the visa process well in advance of your trip, if there is any problem during the processing.

But the problems don’t always come up for reasons related to the documentation provided, but also for reasons related to the applicant or their country of origin. For example, it may happen that the applicant has provided all the documentation correctly, but it has criminal records, or comes from a country that is currently at war or with an epidemic. These are also possible cases of denial of visa application.

You must consider the following:

1. REASONS RELATED TO THE CONTRIBUTED DOCUMENTATION

1.1. The documentation provided is incomplete

It means that the applicant has not provided all the required documentation. Therefore, it is important, before submitting the documentation, to check the visa center or the consulate website, the updated list of necessary documentation, because sometimes the list of documents to be submitted may change from one day to the next without prior notice. 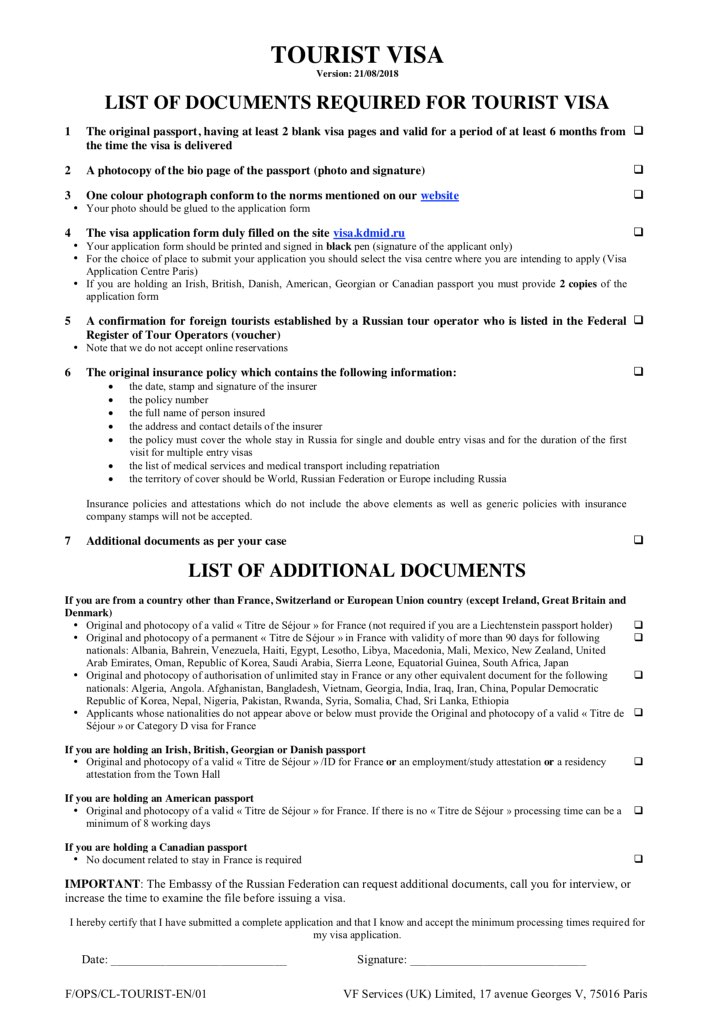 If you submit the application personally at the Consulate or at the visa center, they will quickly tell you which documents are missing so you can come back another day with all the documentation.

1.2. The documentation provided is incorrect or with errors

But the most frequent problem that I have found is not that the documentation is incomplete, but that the applicant submits some of the documents in an incorrect manner.

If you have submitted any documentation incorrectly or with errors, they will inform you from the consulate or visa center so that you can correct the documentation.

These are the problems of incorrect documentation that I have most frequently seen and that you have to try to avoid:

A) Problems with your passport

The vast majority of people are aware that they must provide the original passport, but in this case some problems can arise for the following reason: 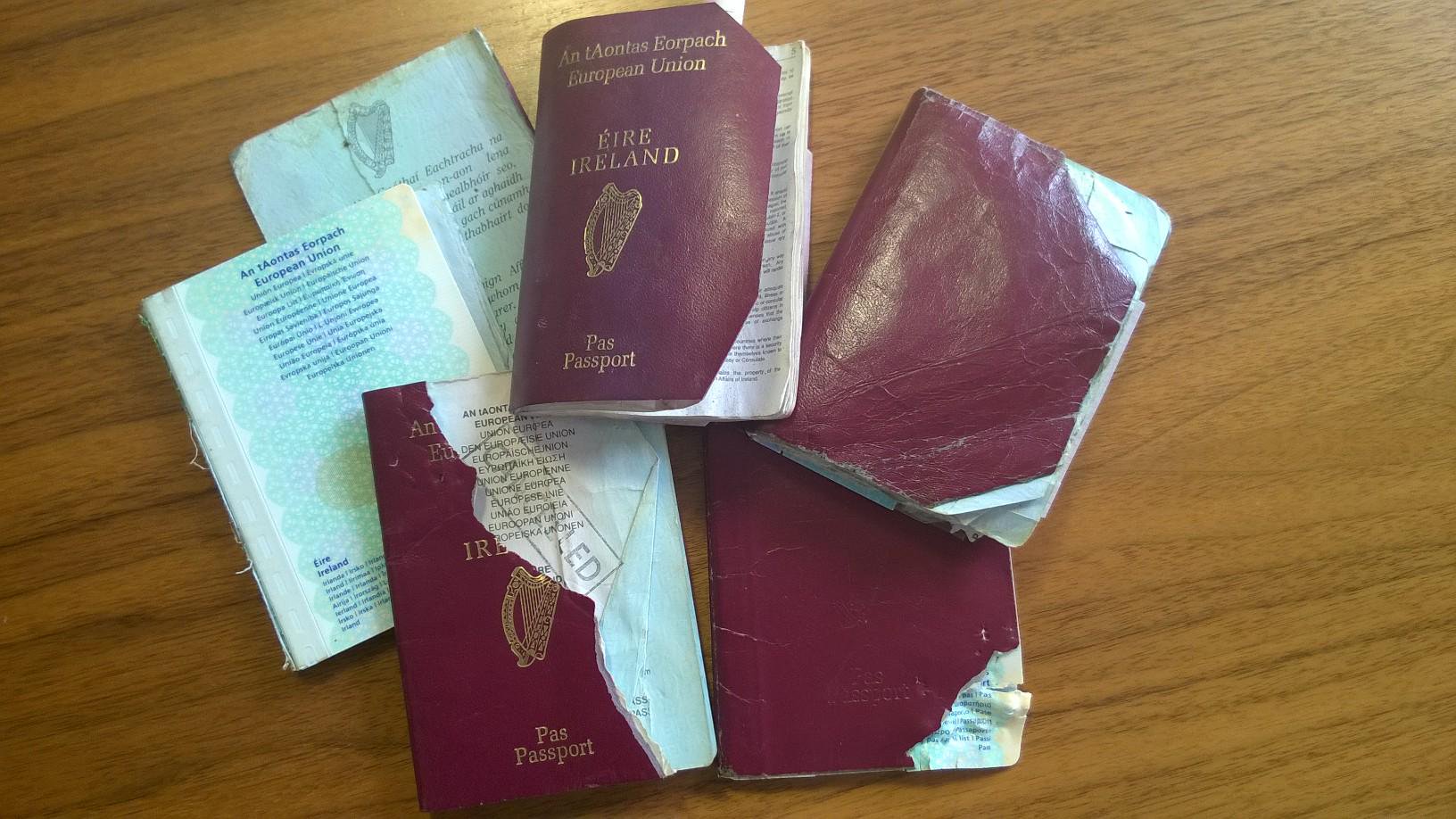 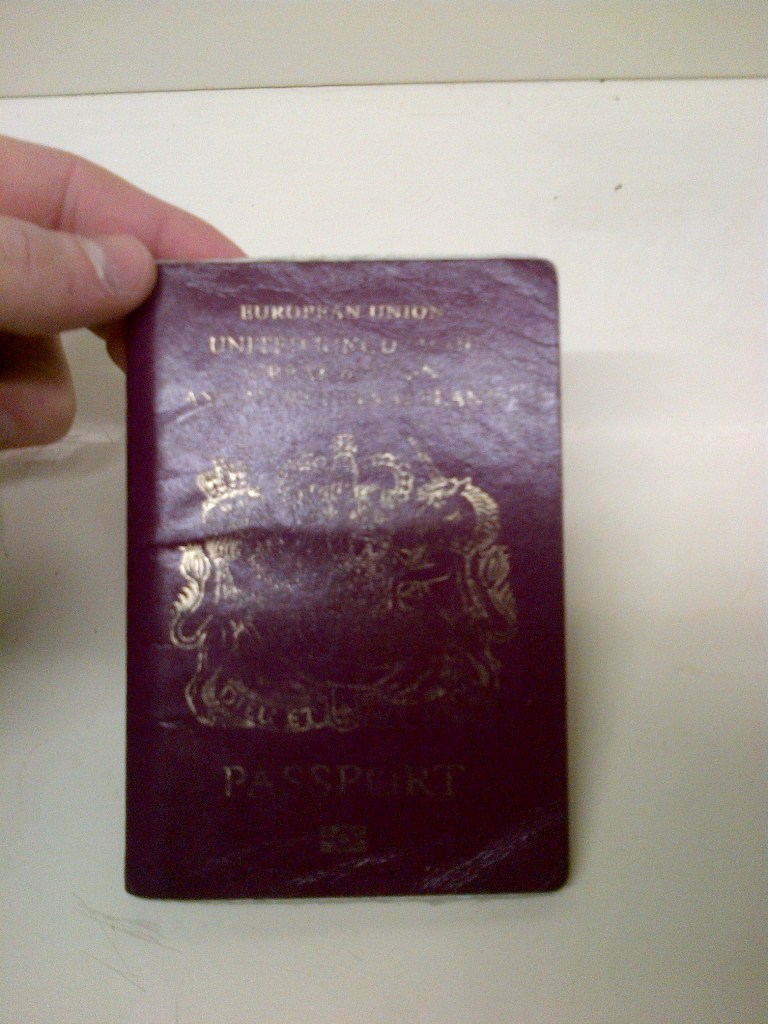 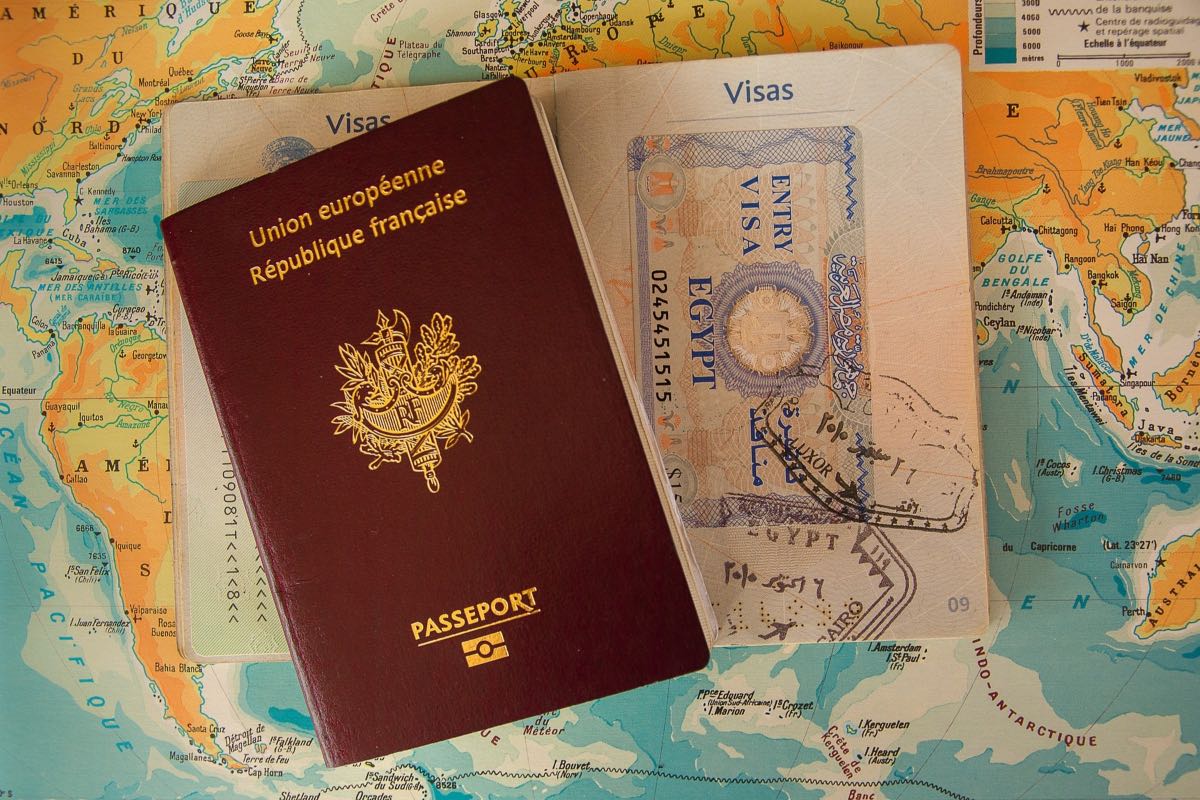 B) Invitation letter or visa support

Don’t confuse the invitation letter with the hotel reservation. It has nothing to do with it.

This is an example of hotel reservation with Booking (I know it is a Beijing reservation, but currently I don’t have any Moscow reservation at hand, hehehe): 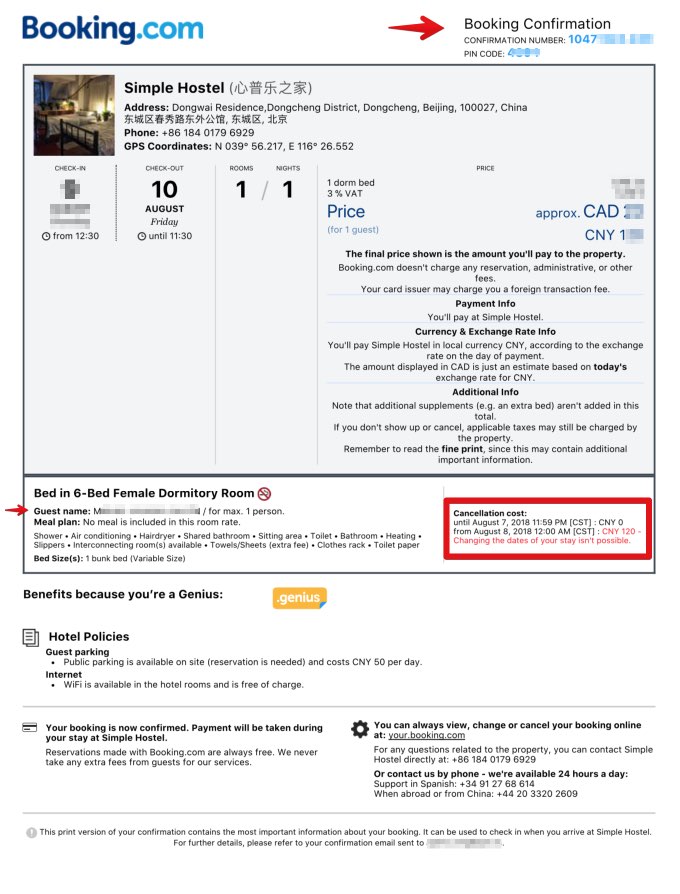 And this is an example of invitation or visa support document: 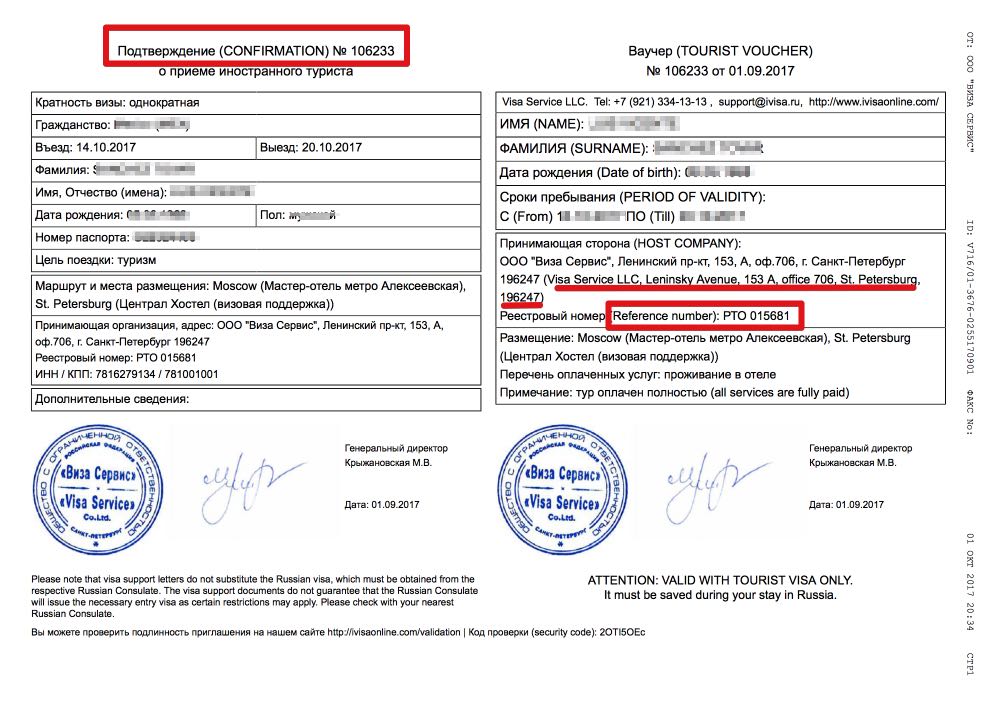 To apply for the visa, it is always mandatory to submit an invitation letter issued by a Russian tour operator. However, hotel reservations don’t need to be provided (except for citizens of certain countries deemed as immigration risk).

But sometimes, the letter of invitation provided contains errors, most of the time because the invitation request form has been filled out incorrectly. The most frequent errors are the following:

In conclusion: make sure that the data in your passport exactly matches the information in the invitation letter, including the name and address of your hotels or apartments and never include private addresses in a tourist visa application.

The tour operators that I recommend in this blog can quickly modify your invitation letter if you have made an error, writing to the following emails:

Finally, you must also be very careful with websites that sell false letters of invitation, which are plenty on the Internet.

In the first place, it must be said that for some years now it is mandatory to fill out the application form electronically. Therefore, don’t think of printing the form and filling it with a pen. 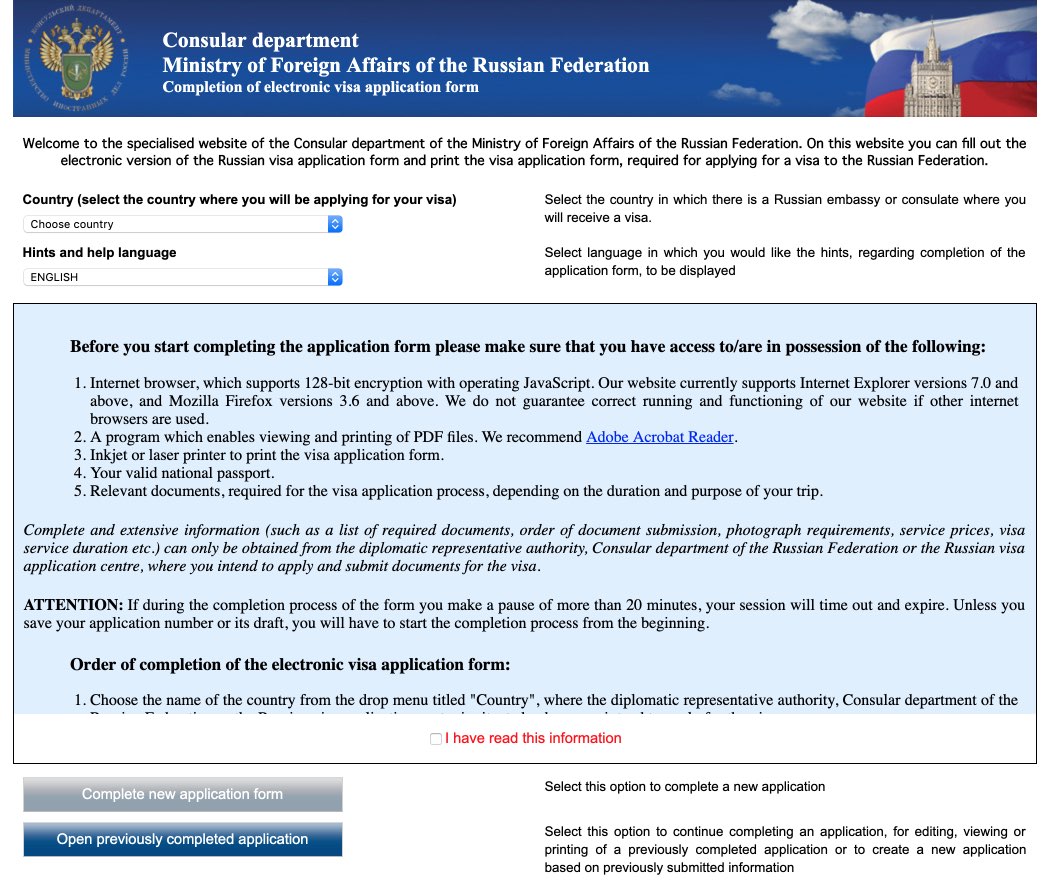 Regarding the completion of the electronic form, people also make mistakes in some of its sections. The most frequent errors that I have encountered are the following:

Once the visa application form is completed electronically, it must be printed and signed. Well, there are people who forget to sign the application form. If you do the proceeding in person, there is no problem because at the visa center they will check the documentation and they will quickly tell you that you must sign it. But if you send the documentation by mail and without signing, you will have to make another shipment with the cost that this implies.

In addition to signing the form, you must also paste a photo that complies with the requirements established by the Consulate: recent photo of size 3.5 x 4.5 cm (though 3 x 4 cm is also accepted), taken on a light background, printed on photographic paper, without smiling, without sunglasses or hats, etc.

You must paste the photo, don’t staple it. Here are the basic rules to follow: 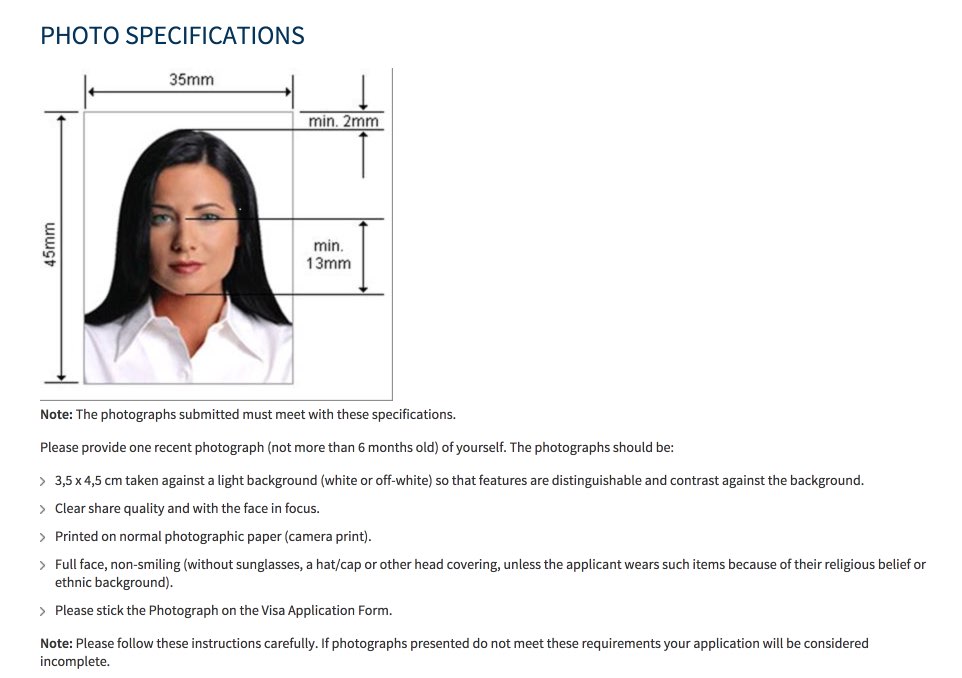 Sometimes, people submit their health insurance documents in which they don’t indicate the countries of coverage or the validity period. In this type of insurance, you need to request a certificate from the company indicating that it has coverage in Russia (or in the World) and that it has coverage during the period of the trip.

1.3. The documentation provided is correct but is submitted more than 90 days in advance

In most consulates, they don’t accept the visa application if it is submitted more than 90 days before the scheduled start date of the trip, so it is preferable not to begin the visa proceeding so early. It is better to wait. 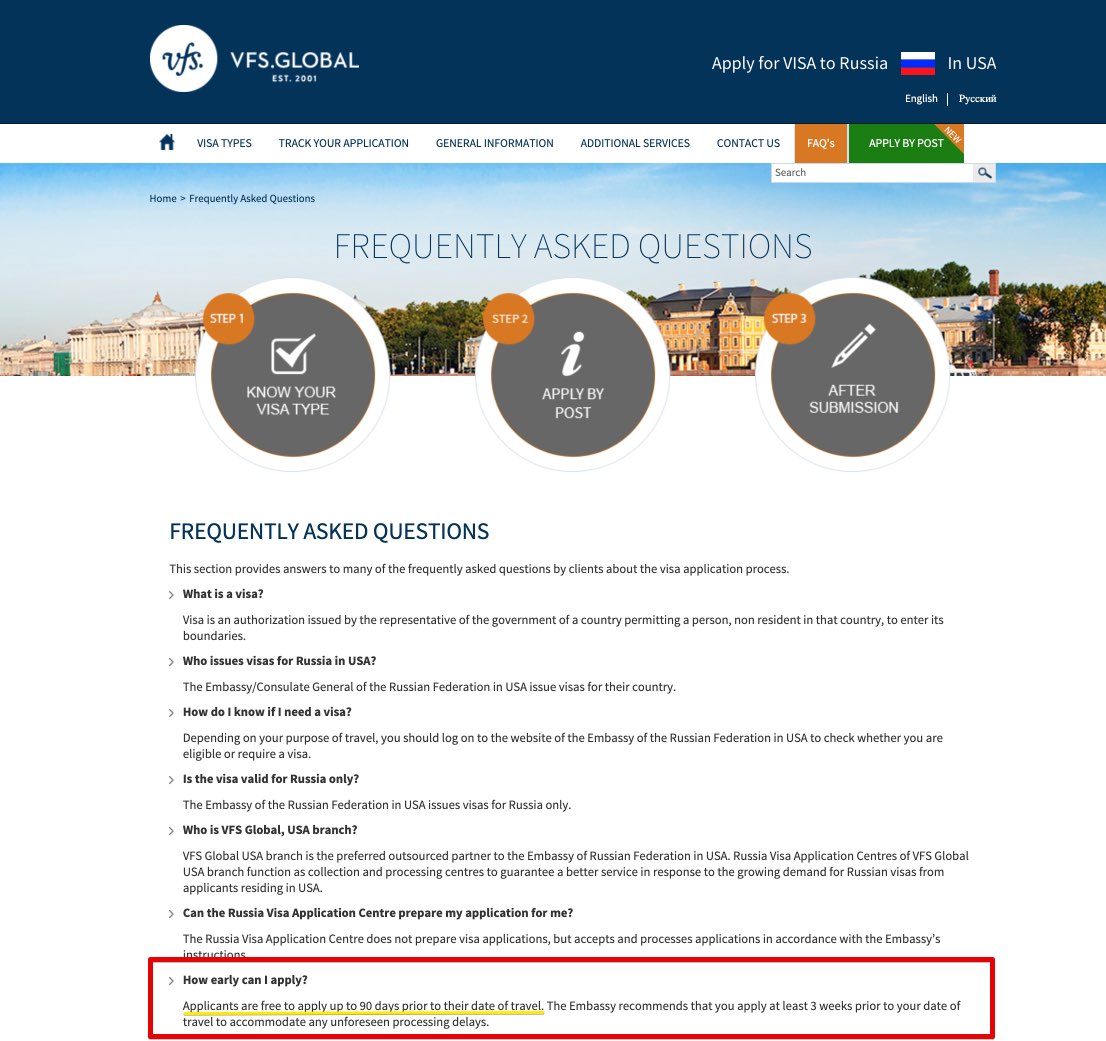 There are certain cases in which the consulate may request additional documentation. These are some of the cases that I have found and in which, after providing new documentation, the applicants didn’t have any more problems:

To prevent the consulate from requesting additional documentation, many applicants don’t indicate that they have friends or relatives in Russia, and that they will visit only Moscow and St. Petersburg for tourism.

2. REASONS RELATED TO THE APPLICANT PERSON

2.1. The applicant comes from a poor country, at war or with poor diplomatic relations with Russia

In Russia, as in other countries, limitations are imposed on entry into the country for reasons related to the origin of the country of the applicant. The reasons can vary: 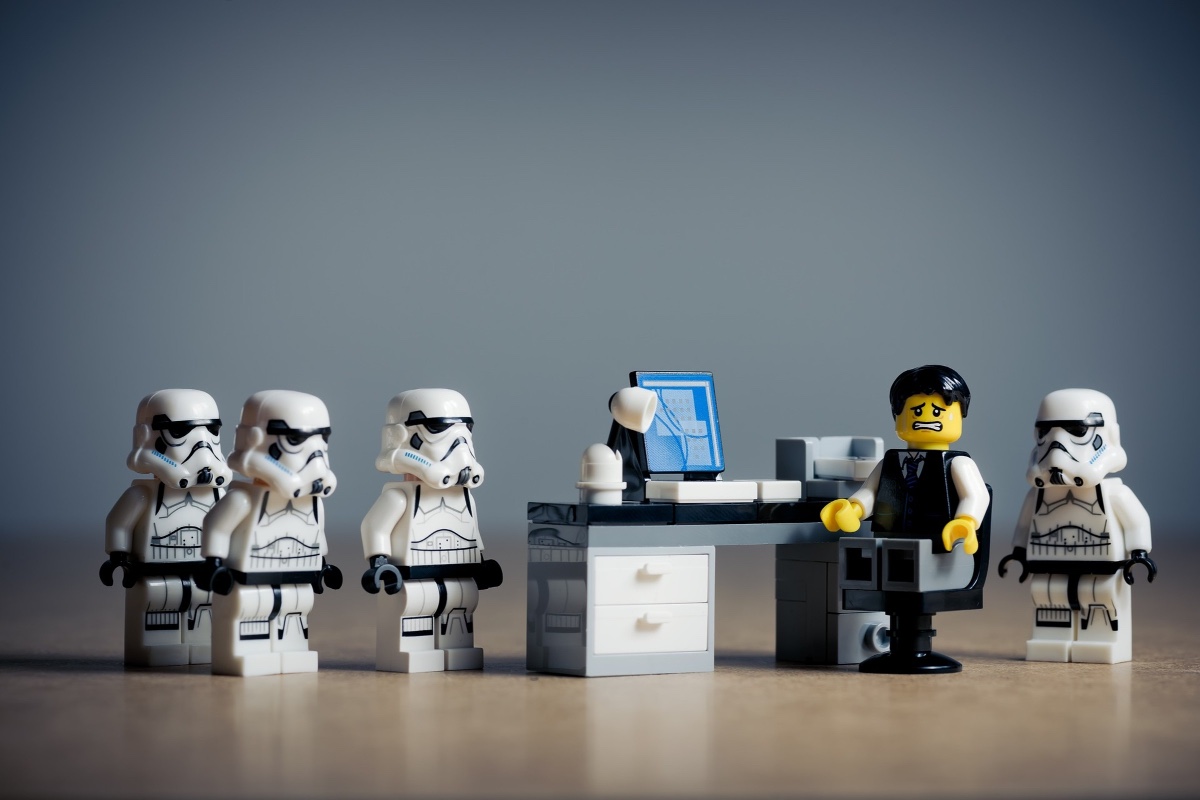 2.2. The applicant is considered a danger to the Russian authorities

Also, if Russia considers that you can be a danger to their country, you can also be denied a visa. For example:

It must be said that these grounds for refusal are applied by all the countries of the world, not only in Russia.

It must also be said that, from the consulates, it is increasingly common for certain people to be investigated in their social networks, so you need to be very careful with the things that are published on Facebook, Twitter or other social networks.

2.3. The applicant was born in Russia

It is paradoxical, but one of the most common causes of visa denial is for those citizens who were born in Russia or the former USSR, who emigrated abroad and can’t prove that they are no longer Russian citizens.

Therefore, citizens of the former USSR and who currently have the nationality of another country, when applying for the Russian visa, they must provide some documentation proving that they no longer possess Russian citizenship, such as:

If you are applying for a visa for a minor, you must provide a copy of your birth certificate, in which it is clear that at least one of the parents is not a citizen of the Russian Federation.

2.4.Other reasons related to the applicant

Other cases related to the person requesting the visa, and in which they can deny you the visa are the following: 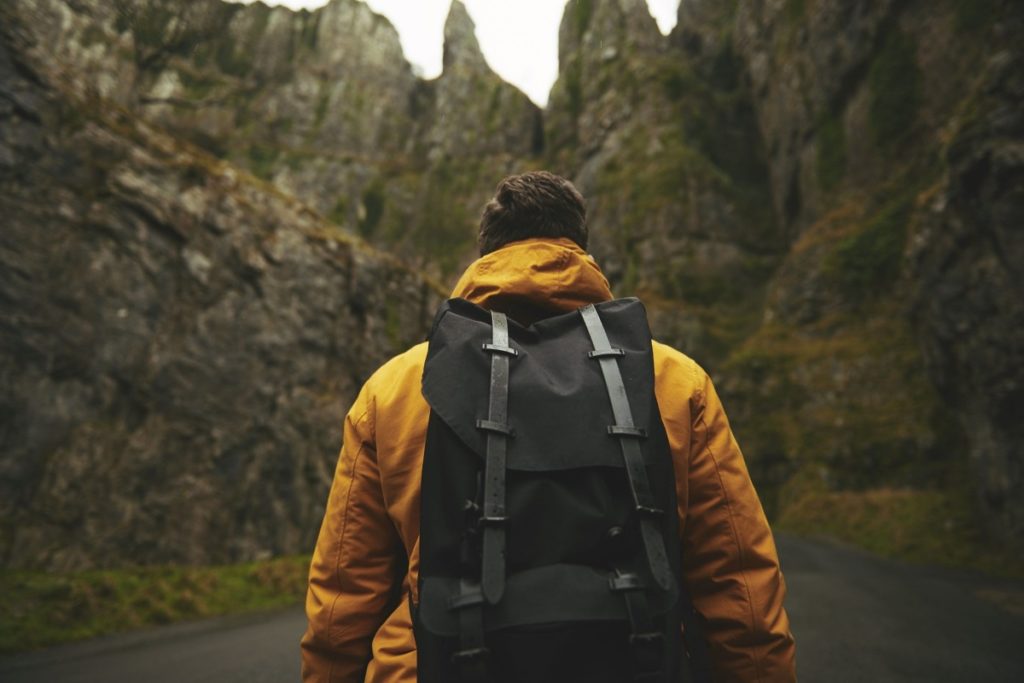 3. THE INTERVIEW AT THE RUSSIAN CONSULATE (AND THE KGB)

There are occasions when the consulate, before issuing the visa, wants to have an interview with the applicant. The consulate has the right to interview you for whatever reason.

In these cases, don’t be alarmed, because in most cases, the consulate simply wants to have more information about you and your trip.

In this interview you will have to be honest and tell the whole truth.

Some of the questions that you will get asked are the following:

Sometimes they can interview you without a clear reason, but in other occasions the interview can be due to very different causes: if you are travelling to an unusual area of Russia they will want to know the reasons for your trip, if you are or have been a police or military officer, it is also possible that they will ask you additional questions, etc.

In most cases it is a routine procedure after which the visa is granted. Relax, the KGB is not coming. 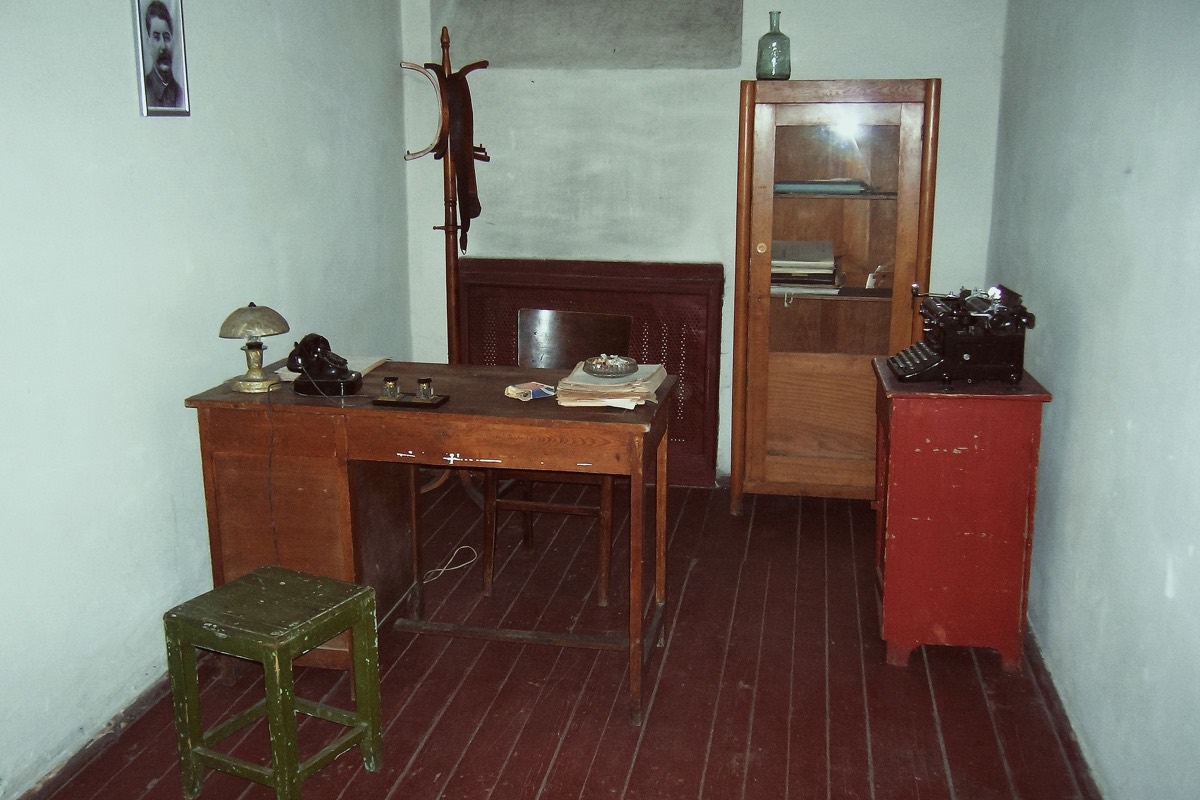 From what I told you this article it can seem that many visas are denied. But nothing is further from reality. The vast majority of people who submit the documentation correctly are granted the visa and only in very special cases, these are denied.

I hope that this article has been useful to you, so you can avoid the most frequent mistakes that are made when submitting your application

More than 400 pages with all the information you need to plan your trip to Russia online easily, cheaply and avoiding queues
END_OF_DOCUMENT_TOKEN_TO_BE_REPLACED