You are here: Home / 2. Transport / 2.2. Russian trains / Travelling between Moscow and St. Petersburg: Which is the best way?

A frequent question is which would be the best way to travel between Moscow and St. Petersburg. There are basically three options: take a direct plane that will take 1 hour and a half, take a daytime TGV (Sapsan) that takes about 4 hours or you can take a night train such as the Red Arrow that makes the journey in about 8 -9 hours. An alternative option is to take a bus (more economical but more uncomfortable)

If you’re travelling to Russia, the most common thing to do is to visit its two main cities, Moscow and St. Petersburg. The distance between the two cities is more than 700 kilometers so you have to choose a method of transport to travel between them.

Whichever method you choose, you should take into account two things:

Taking a trip between Moscow and St. Petersburg is not really expensive. An outgoing trip can cost around £ 15. A good way is to use a flight comparison site such as Momondo to find the cheapest price. The low cost company Poveda is usually the most economical option.

There are several companies that provide the journey:

While this is an economic and fast way to travel (the trip takes about 1 hour and a half), keep in mind that you must travel to Moscow airport (airports are on the outskirts) and then also you have to go from Pulkovo airport to St. Petersburg. Meaning that since you have to leave the hotel in Moscow until you get to the hotel in St. Petersburg it can take you at least 5 hours. 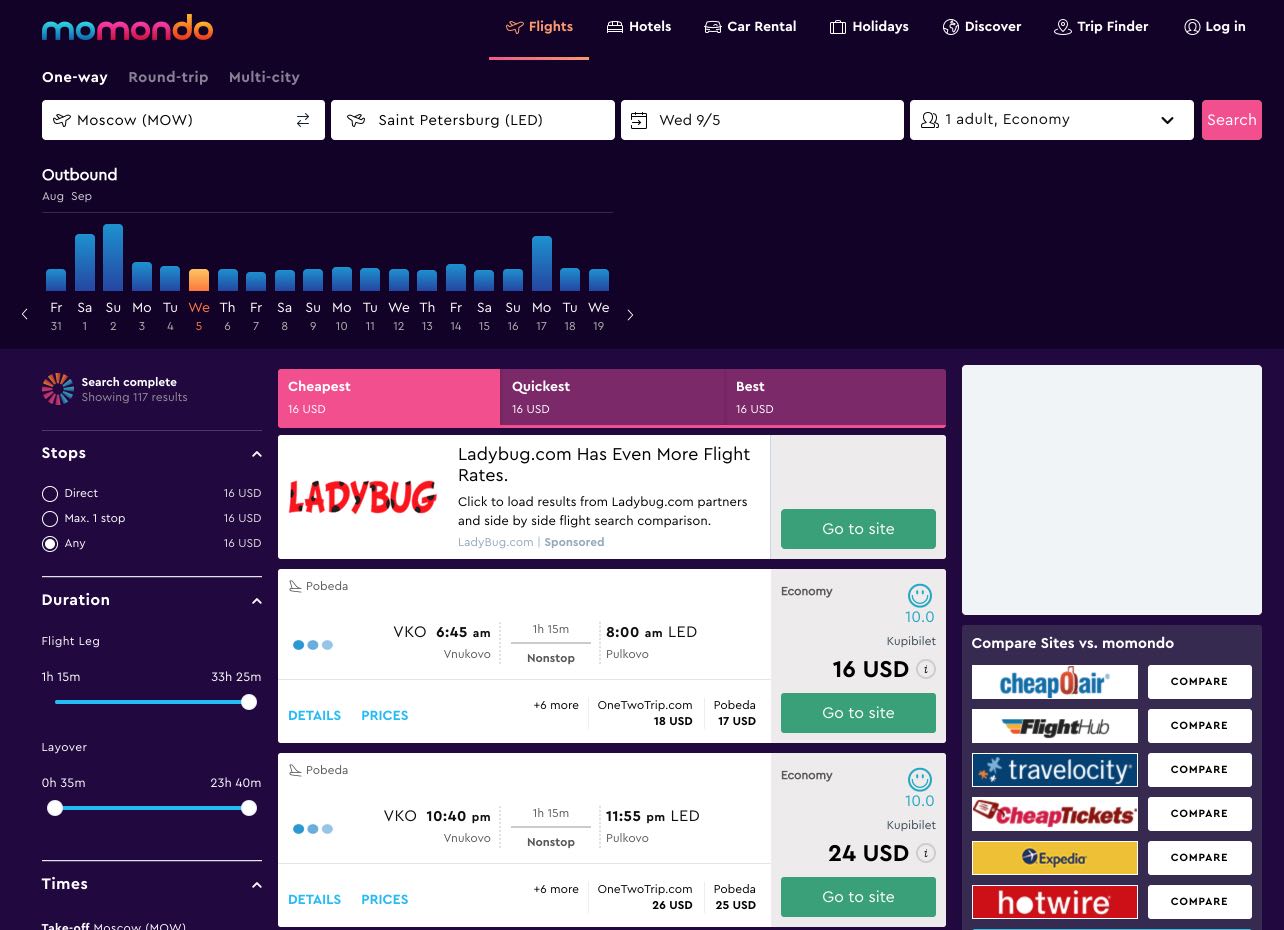 The second option is to use a daytime TGV such as the Sapsan, which will take you from Moscow to St. Petersburg in about 4 hours. An outward journey sitting on this train can cost between 10 and 25 pounds (trains leaving first thing in the morning are usually cheaper).

The tickets for the trip are purchased at the same station, but to get a better price you can buy them electronically 90 days in advance:

There are several Sapsan high-speed trains that depart during the day: the pair-numbered trains (752 to 780) make the journey from Moscow to St. Petersburg, while the odd-numbered (751-779) made the reverse journey.

A total of 9 trains depart daily, the first leaves at 5:40 from Moscow, while the last one leaves at 19:40. These times may vary and it is best to consult online on RZD’s website.

The trains depart from Leningradskiy station in northeastern Moscow (which is quite centric) and arrive at the station in St. Petersburg (located in the very convenient Nevsky avenue).

Ultimately, the high-speed train is a cheaper and faster method of transportation. In addition, the train leaves you in a centric location.

IMPORTANT. If you buy a train ticket from Moscow to St. Petersburg, the departure station that will probably appear on the ticket will be the Oktyabrsky station in Moscow, a name previously held by this station, now called Leningradsky. 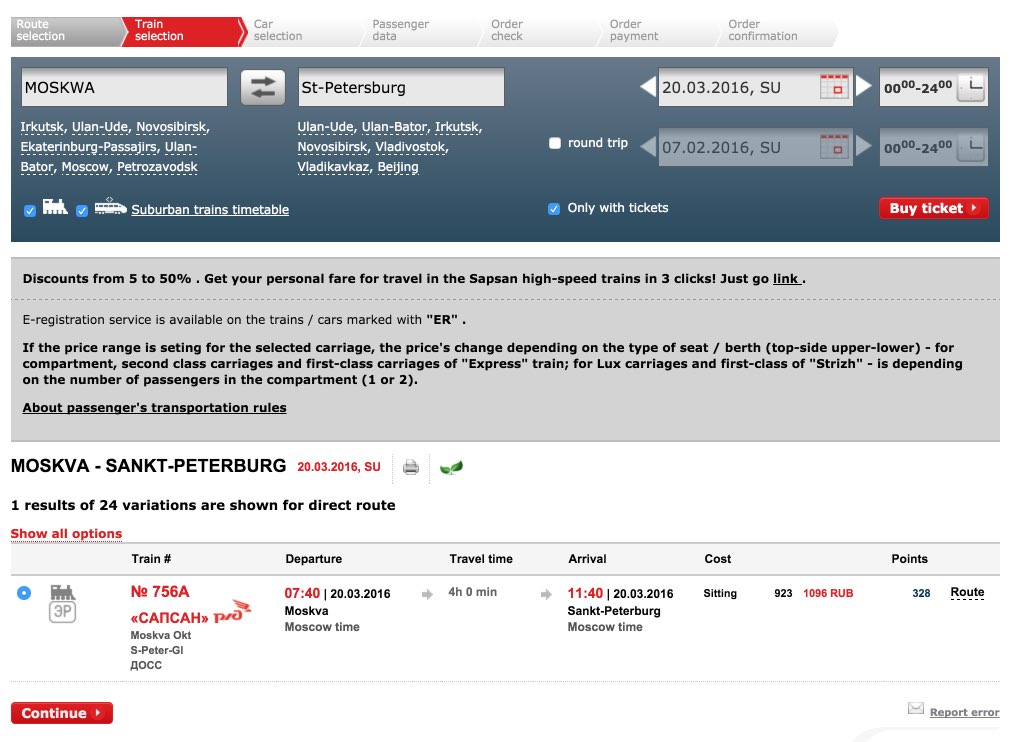 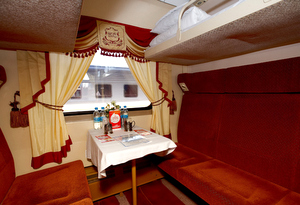 The third option is to use a night train. The best known are the Red Arrow (002A train from Moscow) or Grand Express (054) which depart at 23:55 and 23:40 hours respectively, and arrive at around 8 am to St. Petersburg.

Prices vary widely depending on the compartment, but it starts from £ 25 in a compartment for 4 people (though a lot depends on how early it is reserved and the time of the year).

This is a more expensive method of transportation, but with quite enough charm and through which you pass the night that you never have to do in Moscow or St. Petersburg. Though you must keep in mind that not everyone falls asleep easily on the train (I haven’t been able to sleep in the Red Arrow) and trains arrive at 8 am and you will not be able to check in at the hotel till later.

To consider. If you are three people and you want to have a compartment of 4 people without another companion, you can buy the 4 tickets, repeating in the purchase form the name of one of the three travelers. 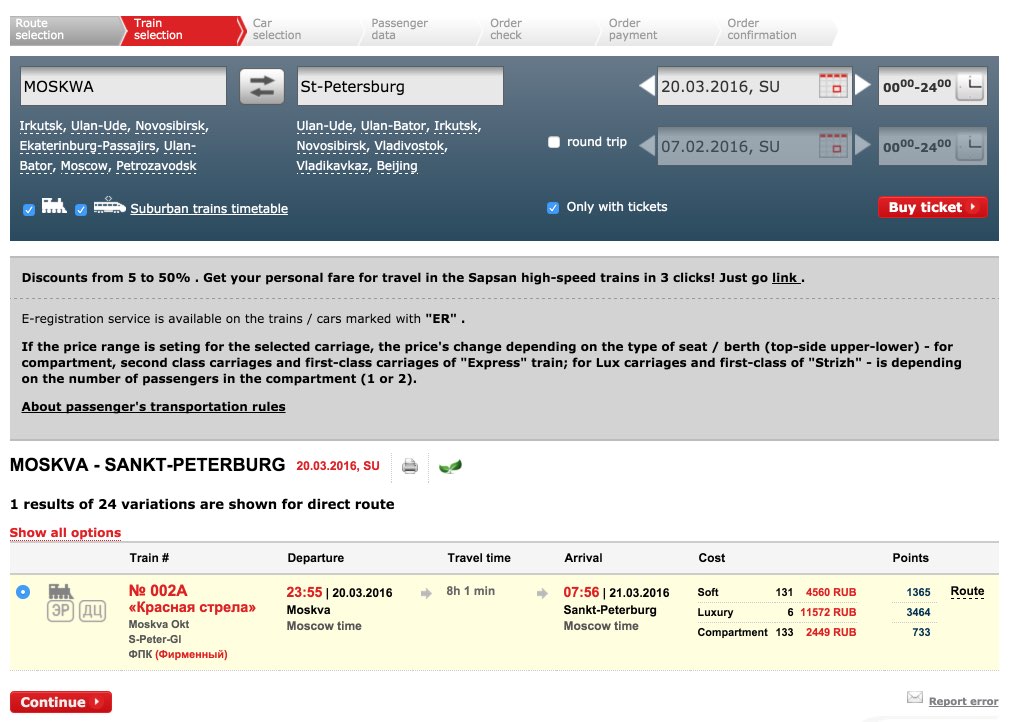 Another means of transport to travel between Moscow and St. Petersburg is the bus, a medium usually cheaper but slower than the plane or train. Normally the journey is at night and the trip takes about 10-12 hours. There are many bus companies that make this journey. To know what these companies are, what station they come from and buy tickets in advance, you can use INFOBUS booking platform, which allows you to buy tickets with 45-60 days in advance.

Finally, I can tell you that there are cruise ships that make the journey from Moscow to St. Petersburg in six days, but of course this is another very different way to travel and we will discuss in another article.

I hope this article has cleared your doubts and has helped you choose the best way to travel between Moscow and St. Petersburg

More than 400 pages with all the information you need to plan your trip to Russia online easily, cheaply and avoiding queues
END_OF_DOCUMENT_TOKEN_TO_BE_REPLACED